On saturday, we had a conference at dover with IFP students from both campuses. The fact that we were all doing the conference together really reminded me that we are one school and emphasised on the fact that IFP brings people together.

I believe that this conference was one of the most important events in IFP so far in terms of the learning outcomes. Walking out from this conference, I had strong knowledge on all the possible ways to promote piece that can be used not only on the trip but also in everyday life.

Firstly, we had a whole team meeting where teachers created some ice breakers. One of the best ice breakers for me was the one where there was a map of the world projected on the wall and each individual had to go where their favourite food was. It was interesting to see what you had in common with others as food is a very important topic for students. (we love food). This not only made us learn a bit about each other, but also made us realise that we had things in common with everyone. After this, the teachers separated us into teams which had different topics to work on. My team had the subject on STATUES. The rules were that we had to create a fifteen minute conference on our subject to the other IFP students. It was interesting as the whole morning, we did icebreakers but they told us that we really had to think hard if we wanted to do one as we only had fifteen minutes. This taught us that ice breakers are not compulsory for a conference to work well.

In the rooms, we all talked about our research on statues and everyone had different stories about them as we all come from very different backgrounds. Yet, we had a very rich conversation where I learned a lot on the history of some statues.

As a whole, we wanted our conference to raise awareness on the different meanings behind statues. Most of them think that statues are to honour someone even though that might no be the story at all. We wanted the students to start researching or understanding the different perspectives that might exist when looking at a statue. An example was this one: 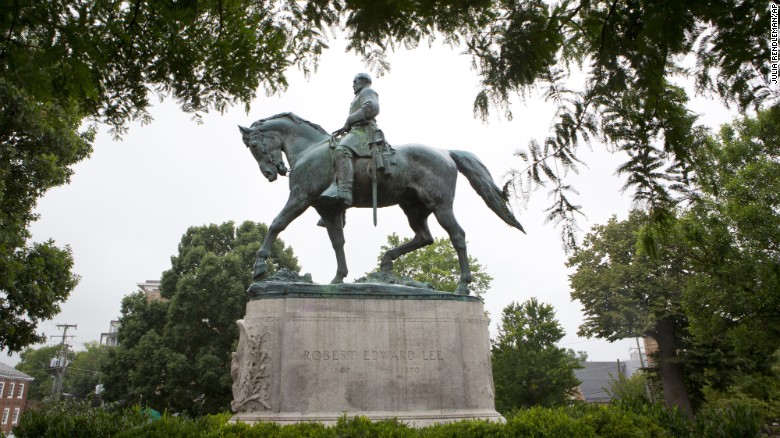 This is Robert Edward Lee who assumed command of the Army of Northern Virginia, which he would lead for the rest of the war. He fought to preserve slavery and political liberty for whites. Nevertheless, when you see this statue, you are under the impression that he is being honoured. People might get wrong information from it. There has been a lot of conflict behind this statue as many people want to take it down. It is now covered by a black cloth.

As a group, we decided not to have an icebreaker as we already had some this morning and felt like for the short time we had, we did not have enough time to do one. Nevertheless, we started by making the students discuss within small group what they think the function of a statue has and to what extent doe is honour and individual. This helped them understand each other’s perspective and know where they stand on before being informed on the different perspective. So that they can compare their opinions before and after, we made them write on a post it note and put it up on the board. One challenging aspect of this conference was to be able to speak to such a large group and make sure they all feel included. At the end, the main comment that we had is that we should have showed more individual help to the group. Some of us should have walked within the small groups and ask if they needed anything or had any questions. Perhaps this would have helped in including everyone.