Skip to content
(Written by Keri-Lee Beasley and Dave Caleb) 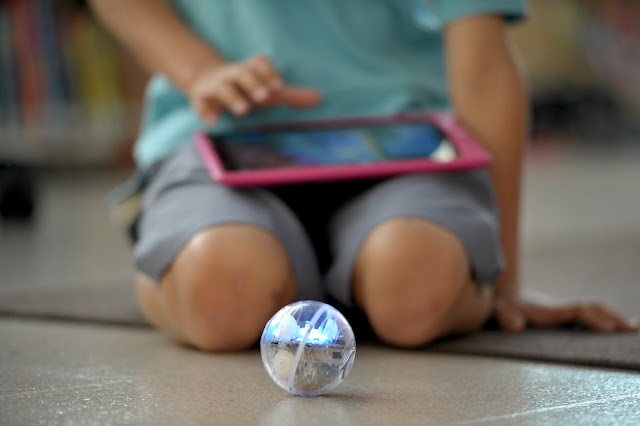 In August, we attended the Asia Pacific ADE Institute in Singapore. One of the activities at the institute involved using the Tickle app which uses simple drag-and-drop code to control Spheros and Rolling Spider mini-drones. An idea was born.

We decided that we could offer an activity at school involving these great tools to our primary students. We purchased 10 Spheros and 10 Rolling Spider Drones and offered the activity to 20 students.

We hope that in sharing some of the things we have learned, we will save other people some time when setting up their own Coding activity!

Pair Your Spheros
Spheros have a 3-colour code which flashes when they are turned on, e.g. BBY (blue, blue, yellow). We used a sticker to label each sphero with a number, then paired one Sphero to one iPad and labelled the iPad with the same sticker. This proved to make our time with the Spheros considerably more efficient. Students arrived, found their Sphero and iPad easily and were able to get to work right away, without having to figure out which of the 10 Spheros was theirs, and to pair it accordingly. 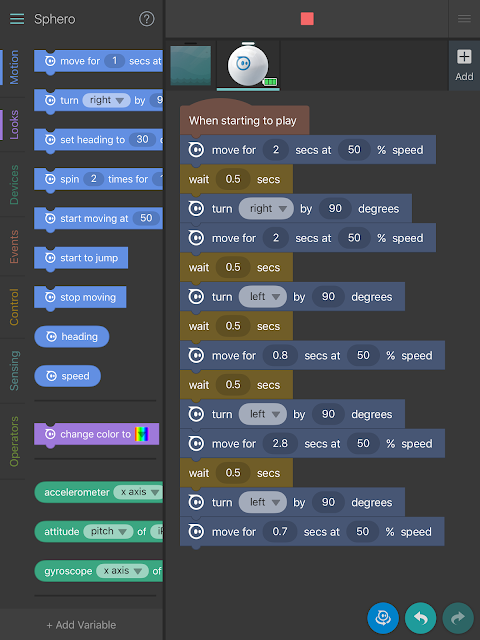 Start off by letting them play

The first time the students touched the Spheros, we showed them how to connect to the iPads and then we let them play. We wanted them to inquire into what they could do with the sphero and see what was possible. We decided to use the free Tickle app as it uses drag and drop block code programing to control the Spheros. 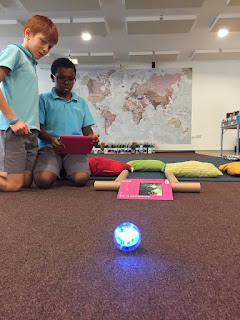 Many of them also discovered that if they included a pause between each piece of code that involved movement, they would have more accuracy in the creation of their triangle. It was nice to share these student learnings with the rest of the group. 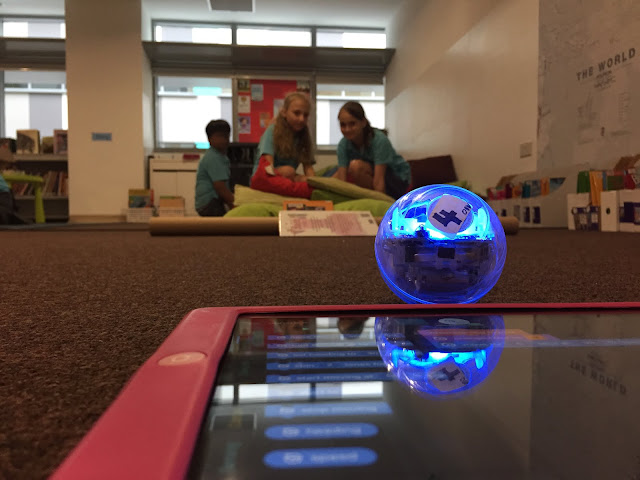 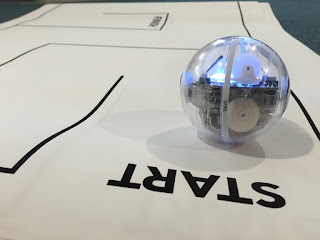 We printed mazes on paper using the large format printer. The challenge for the students was to get their sphero through the maze without running over the lines. They loved this challenge and enjoyed fine tuning their code on Tickle to get their Sphero through the maze. Even though the sphero was on a paper map, the material under the paper (carpet or linoleum) affected their results. The students also realized that the light on one part of the sphero was the back and they could point the sphero in the direction they wanted in the app. 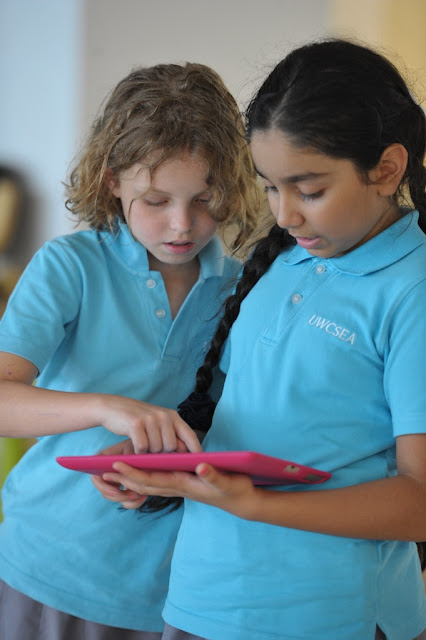 We know that students learn best with others and this activity really helped prove that. Our students enjoyed having someone else to bounce ideas off of and explore different possibilities for their code. The students didn’t argue over who got to enter the lines of code as they were able to try different ideas quickly and see the results. Each student could easily try their own idea and they were working together to solve a problem.

The students were enjoying the Spheros but we decided we would try to use the mini-drones. There were a few differences which presented us with challenges when compared to the Spheros. The drones couldn’t be paired as easily with just one iPad like we had done with the Spheros. So when the students turned on the drone, it would appear on every iPad. So we had to clearly label the drones to make sure that the students only connected to their drone. 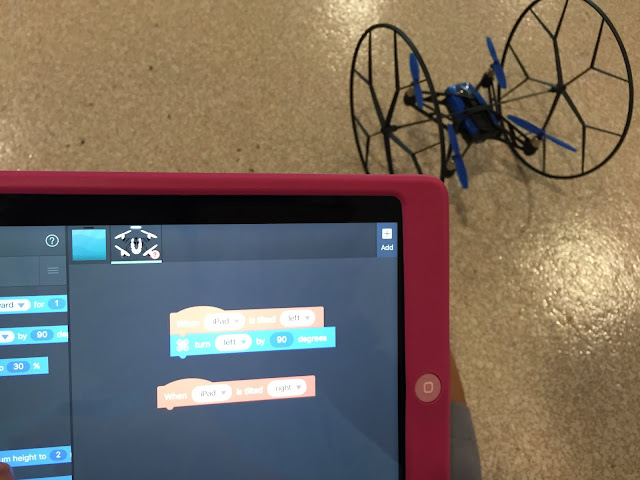 Keep them Charged
We made sure that the Spheros were always charged and we didn’t have any problems with them running out of batteries as long as we had remembered to charge them beforehand. We had been warned that the mini-drones have a very short battery life so we bought 5 extra batteries. Flying the drones constantly runs the battery down really quickly. You can actually see the battery percentage slowly counting down. So instead of flying the drones constantly, the students tried to run short flight programs.

A Different Purpose
Once again, when the students first started using the drones, we got them the explore on their own what they could do. There were a number of crashes and a few bent rotors but it was all ok.

At first, the students were getting frustrated with the drones because they are not as precise as the Spheros. The students could run the code twice and get two different results. Sometimes the drones would take off and mysteriously drift backwards.

The solution was to use the drones in a different way than we had been using the spheros. Instead of trying to get them to follow a program and follow a precise course, we found that the students could use more real time commands to control the drones. 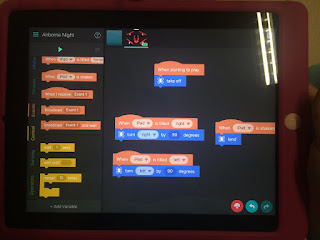 One of our worries is that if one of the students uses the iPad to control the drone in this fashion, it becomes less of a team effort than entering code and seeing if their program works. When students enter a set of commands as a team, it doesn’t matter who presses the button and starts the program running, the device is going to do what the program says. When the program is designed to respond to how the iPad is moved, it becomes more of a one person activity. There is, of course, value in both forms of coding and that is the point. It is great to have a balance and learn how to use both types of coding experience.

Never Assume you are right
When we originally started out, we thought that the drones would be so popular that once we got to them, the students wouldn’t want to go back to the spheros. We were wrong. A number of the students wanted to go back to the spheros. And, to be honest, if we had to choose between the drones and the spheros, we would choose the spheros for the accuracy and especially for their battery life. But we are so excited that we have both because they both offer something a bit different and the students love learning to make these machines work but dragging and dropping code into a box on an iPad.